Tony Henry was this week fired by West Ham over comments in an email about not wanting any more African players at the club.

Henry was said to have informed at least one agent there was a block on signing Africans, something West Ham themselves have denied and pointed to a record of signing such players.

The Daily Mail had launched the story, and said: ‘Henry sent an email on January 27 — in response to an inquiry about a footballer of Cameroonian descent — to another senior West Ham official and an agent.’

In the aftermath, there’s not been a great deal said about the footballer involved. Some have suggested it’s Ibrahim Amadou, and there’s a few things to back that up.

Brought up in France, Amadou was born in Cameroon, and linked to West Ham at the end of the window, so there’s a couple of boxes ticked.

Saturday’s edition of L’Equipe would provide further basis for that claim, and perhaps sheds some light on what actually happened.

Lille wanted €20m, it sounds like they were desperate for it, with L’Equipe stating: ‘Marc Ingla, the general manager, had even mandated the British agent Willy McKay to achieve this. Until the last moment, he tried to add to the file, for example with West Ham.’

Willie Mckay has connections going back some way with West Ham, openly talking to The Daily Mail about his direct dealing with David Sullivan back in 2011. He also has a chequered past which includes being arrested in 2007 over football corruption.

In April 2008, Karen Brady and David Sullivan, when the pair were at Birmingham City, were both arrested as part of the same probe into football corruption.

All three were later cleared.

In December 2008 Mckay was quoted by The Daily Mail accusing the FA of setting him up over an investigation into Benjani’s transfer from Portsmouth to Manchester City. Mckay revealed he’d taped a private conversation with FA lawyer Dario Giovannelli about accepting a warning over his part in the move, but said things changed and a hardline committee was brought in to judge him.

He ended up with a suspended ban.

In 2015 it was reported in France Mckay was helping West Ham with the potential signing of Andre Pierre Gignac from Marseille, with David Sullivan said to have travelled on a private jet to France on deadline day (winter window 2015) in an attempt to get a deal done.

Mckay has connections throughout French football, and earns commission taking players to England, West Ham have been a subject of his attention repeatedly. 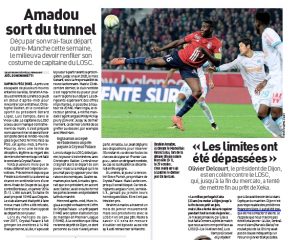 On Lille’s attempts to get €20m for Amadou, L’Equipe have now revealed McKay’s West Ham efforts.

With the French newspaper explaining McKay was actively trying to persuade West Ham to sign Amadou, it gives greater weight to the thought the defensive player’s potential transfer is behind the Tony Henry email leak.

It’s worth noting that on January 27th, Belgian newspaper HLN reported Henry was particularly keen on Leander Dendoncker for West Ham, with the club’s board also keen: ‘Only manager David Moyes, an eternal doubter, continues to have reservations.’

That’s the same day Henry sent the email about not wanting to sign another African player. West Ham wouldn’t have signed both Dendoncker and Amadou, with both being defensive midfielders/central defenders, and with a late Hammers offer for the Anderlecht player well known it seems the Lille option was knocked back.

David Moyes has since said Henry was a backer of the Amadou transfer, but it doesn’t take a huge leap to believe it’s possible the recruitment head wasn’t so keen, preferring Dendoncker, and that caused annoyance with people trying to push the Lille player to West Ham.

Of course, nothing can excuse Henry’s comments, but this may all give some idea as to why a private email ended up in the public domain and ended the former scout’s time with the club, damaging the rest of any career he has left. The motivation may not have been simply to expose Henry through a concern about racism at the club.

On Friday West Ham published a statement revealing Henry’s exit: ‘West Ham United have today terminated the contract of Director of Player Recruitment, Tony Henry, with immediate effect following his unacceptable comments that were widely reported in the press.

Our action follows a full and thorough investigation.

West Ham United will not tolerate any type of discrimination.

The West Ham United family is an inclusive one where, regardless of gender, age, ability, race, religion or sexual orientation, everybody feels welcome and included.’

That ‘thorough investigation’ had lasted around a day, and didn’t reveal any more on the matter.

Whilst Henry’s comments will rightly forever mark him, perhaps the wider situation with Amadou sheds a light on what was actually going on at West Ham, and how perhaps there’s been annoyance with the recruitment chief holding back a deal.

It could be an agent believed he’d had a long a relationship with the club’s owners, and now someone was getting in the way.