Fiorentina are already planning for the summer transfer window, and it’s all with an aim to do much better next season.

Currently 13th in Serie A, the Tuscany side are closer to the relegation zone than a place in the Europa League, and they want things to change in the new campaign.

This is going to involve recruitment, and chief among the targets is a midfielder. They may also be going for a new manager, with Corriere Fiorentino naming possibilities as Ivan Juric, Luciano Spalletti, Unai Emery and Eusebio Di Francesco.

Towards the end of the article, it’s claimed their could be a transfer ‘flashback’ to Sander Berge. Fiorentina were interested in the player before he swapped Genk for Sheffield United, and the suggestion is they could possibly go for him again.

Fiorentina may try, but they probably wouldn’t have any success. Sheffield United worked over two transfer windows to sign Berge, and got him at the end of January. 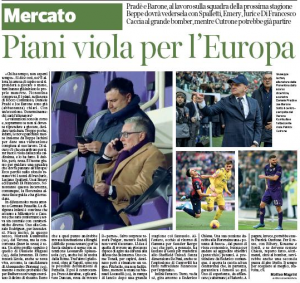 There seems little reason for them to sell, or for Berge to be keen on the move anyway.

Sheffield United are doing better in the Premier League than Fiorentina are in Serie A, so it wouldn’t make a great deal of sense.