Ronald Koeman made it clear before he left Everton that Olivier Giroud had been a major target for the Merseyside club. Trying to sign the Arsenal player wasn’t a completely dead end for the Toffees and they got so far down the road before Giroud himself decided an Arsenal stay would be better.

With 236 Premier League minutes for Arsenal so far this season, it’s not been the best decision for Giroud on that front, and his lack of game time in the club’s primary competition is causing concern in France.

In their Monday edition, French newspaper L’Equipe state ‘The staff put pressure on Giroud’, and it’s explained the striker is being urged to find more minutes, which would be good news for any lingering Everton interest. 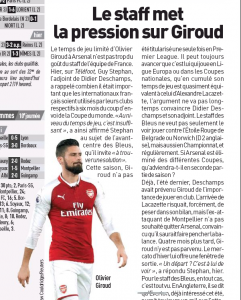 it’s insufficient,” before adding Giroud needs “to find a solution.”

Stephan said a departure is down to Giroud to consider, but it’s clear the Arsenal player’s minutes in cup competitions aren’t being valued very highly.

L’Equipe say ‘The winter transfer window offers him an exit chance’, and Everton rumours are touched upon.

Should Sam Allardyce be as interested as Ronald Koeman was, then it’s certainly worth Everton finding out if a move, whether loan or permanent, is feasible in January.