It’s no secret that Arsenal keep scouting teenagers around the world year after year, and when some of these young players keep being watched after a long time, then there’s a reason for them to feel special.

This is the case of Diogo Gonçalves, a 19-year-old winger from Benfica B. He was watched by the Arsenal scout Luis Boa Morte on Friday and is described by A Bola as “Wenger’s passion”. 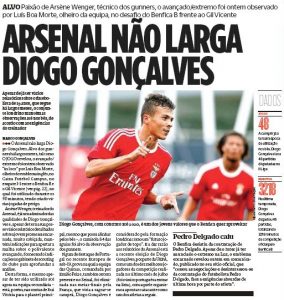 The newspaper claims Gonçalves has been watched by Arsenal for many months, and the Gunners have several detailed reports about his skills as a player.

Wenger, who is said to be a big admirer, told the club’s scouting department to make a deeper analysis of the youngster, who’s been playing for Benfica B for three seasons now.

There’s no info if Arsenal will go after Gonçalves soon. The winger is expected to make his debut for Benfica’s first team this season.