Manchester United fans may have got excited with the latest updates on the Sergej Milinković-Savić race, since the Italian press has been saying that an agreement has been getting closer, but perhaps a deal for the Lazio player means the end of another transfer saga.

A few Portuguese outlets bring stories about it today, saying this could be time for other clubs to try to sign the Lions captain, including the likes of Liverpool and Tottenham Hotspur.

It all looks like a lot of guess work, but it’s interesting to see they’re no longer confident that it’s the Red Devils who will land Fernandes this summer. 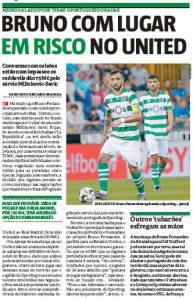 Newspaper Record takes claims from La Repubblica and says Bruno now has his place at Manchester United ‘at risk’.

They explain it wouldn’t make much sense to spend a lot on him and Savic. And that’s why other ‘sharks’ would have a new opportunity to sign the Portuguese international.

The interest from Liverpool and Tottenham means the ‘doors in England are still open’ for the player, as well as the chance of a move to Paris Saint Germain.

Newspaper Jornal de Notícias brings a headline saying Manchester United have ‘abandoned’ the race for Bruno Fernandes, but that’s all based on what they saw coming from the Italian press yesterday. 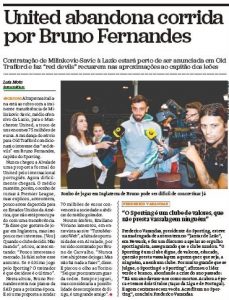 Meanwhile, Correio da Manhã is another one saying the race is open again. They say there should soon be an auction for the player, since PSG have been in contact with his entourage, and both Tottenham and Manchester United have until the 8th of August to do something.

As we’ve said above, none of the newspapers really has the information that Manchester United have given up on Bruno Fernandes. They’re just a little scared after finding out the Red Devils may be working on different fronts.