Wolverhampton Wanderers fans are pretty used to big coverage from the Portuguese press by now, with newspapers giving the club special attention for over a year.

But the number of stories should grow this season, with the arrival of former Sporting captain and Euro 2016 champion Rui Patrício to the club.

This week, newspaper A Bola have sent a correspondent to Walsall just so he could follow Patrício’s first steps as a Wolf.

The goalkeeper watched the club’s friendly against Ajax from the stands, and didn’t speak to the press. Still, ‘Rui Patrício’s new life’ is a featured story today. 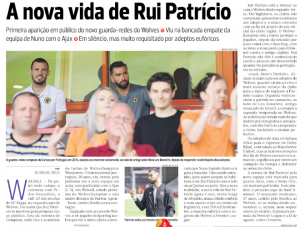 A Bola writes that Patrício’s ‘new reality very far from Alvalade’, is in a ‘very gloomy and sad looking’ city.

They claim that Wolves have been trying to protect the player due to his controversial exit from Sporting, and that’s why he seemed ‘wary’ when seeing Portuguese journalists.

The story also has a bit of fun with the the player’s names is said by Wolves fans, detailing the shouts of ‘Look, there’s Patrizio’ during the game, for a local Portuguese audience.

We cover the Portuguese press daily, and we still hadn’t seen local papers going hard on the players who joined Wolverhampton before. Even when the club were in the Championship.

Maybe everything that Rui Patrício represents to Portuguese football is making things much bigger this time, and the Lisbon papers won’t take it easy when talking about his decision to leave for an alternative club.