The Portuguese press is obviously being dramatic following Porto’s defeat to Rangers for in the Europa League last night.

Steven Gerrard’s side won 2-0 thanks to goals from Alfredo Morelos and Steven Davis.

Starting with Porto newspaper O Jogo, the say the team were their own worst enemy, as despite having a good first half, their attitude in the second left them ‘with no ball, no ideas and no creativity’.

The fact that the Dragons were playing far from home is the main argument used by outlet Record. They use a headline saying ‘lost in a maze’, and say ‘Ibrox is back to being a nightmare’, since the Portuguese side could never win a single match there against Rangers. 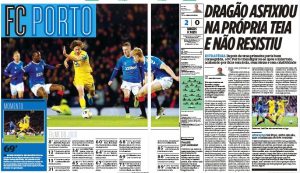 Meanwhile, newspaper A Bola blames Conceição for the system with three defenders. They say the team was ‘comfortable defending’, but ‘hesitant to attack’. It’s written that they should’ve changed formation once Pepe was injured, but his insistence has led Rangers to the win.

With the result, Porto are now the bottom of Group G, and have a very hard task to get qualification for the next stage.