The good season that Wolverhampton Wanderers loanee Ruben Vinagre is having in Portugal is highlighted by a couple of media outlets today.

The main report comes from A Bola, which says the fullback’s form for Famalicão has now drawn interest Benfica.

The report claims the Eagles have three targets at the Portuguese club, and Vinagre is one of them. It’s only an ‘evaluation’ for now, which could evolve to talks later.

Vinagre is considered to be ‘a player with potential’, and that’s why Benfica are currently ‘gathering information’ on a potential future move. 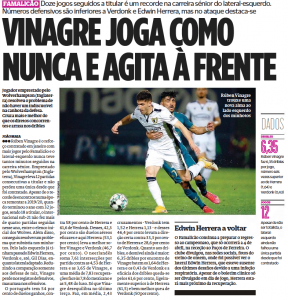 The 21-year-old is featured by newspaper O Jogo as well, following his 12 starts in a row for Famalicão.

The outlet takes a bunch of stats to show why he’s ‘solved’ the club’s problem in the left-back position. They also compare him to the right-backs to show he’s the best fullback in the squad when offensively speaking, as he has the best average rating of crosses and dribbles.

So if things continue like this, it seems very likely Wolves will get some interesting offers for his permanent transfer in the summer.

Vinagre has a contract with the Molineux side running until 2024.