Previous reports from the Turkish media said the Black Eagles won’t be keeping him beyond this season when his loan deal expires as they can’t pay his redemption fee.

Subsequently, Karius has begun his search for a new club and Fanatik claim the Portuguese side are interested in his signature. It’s reported the Liverpool owned player met with Sporting officials in Turkey last month before their Europa League game against Basaksehir and talks well.

It’s stated the Portuguese giants were looking to sign Robin Olsen from AS Roma, but after they failed to make progress with the Swede, they’ve turned their attentions to Karius. 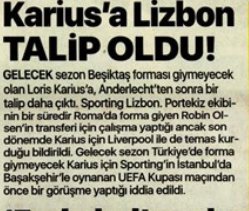 Belgian side Anderlecht have also been linked with a move for the German keeper.

Karius’ contract with Liverpool will expire at the end of June 2021 but it seems he doesn’t have a future on Merseyside.