Since the start of last season, the Portuguese press has been making big coverage of local players who are featuring at Wolverhampton Wanderers, especially because most of them have been succeeding at the club.

But now that things are getting to a new level, it’s time to think bigger. That’s why the national team is now being involved in these stories.

Newspaper O Jogo brings an article today talking about the form of Ruben Neves and João Moutinho, mostly because of their recent performance against Manchester United in the Premier League.

O Jogo takes quotes from José Mourinho, Jamie Redknapp and Neves himself to show the great success they’ve been having in the league. 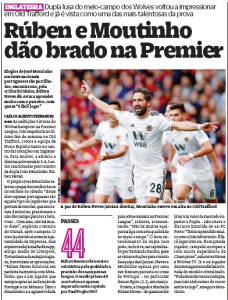 Then O Jogo claims Portugal manager Fernando Santos could soon be using Moutinho and Neves as a midfield partnership in the national team.

The duo have only played together in a friendly against Egypt in March, but now the newspaper claims that their ‘good understanding’ at Wolves could be used by the national team boss soon.

So after having Sporting, Porto and Benfica working as a reference for so many years, it seems that Portugal now have a new team to look up to.