For a few weeks, the Portuguese media have been tentatively presenting the idea of Alex Telles moving to Manchester United.

Often, what they’ve said has been exaggerated and presented as something more concrete than it is, as is the way with transfer rumours.

The general slant of the claims has been that it’s assumed Manchester United want a left-back, given the Sergio Reguilon reports, and Telles’ agent Pini Zahavi has therefore been trying to build a deal.

That makes sense, if you were the agent of a top level left-back who wanted a transfer and saw United being linked with another, you wouldn’t be doing your job if you didn’t try.

And, as per the claims, Zahavi has been trying. There’s been claims of trips to Manchester, then on Thursday, A Bola reported the agent had indicated to FC Porto he’d present an offer soon.

Again, that sounds very much how you’d act as an agent.

Friday saw claims from France of Manchester United agreeing personal terms with 27-year-old Telles on a five year contract, and that PSG were still in the room.

Whilst the French newspaper explained there had been some effort for Telles earlier in the window, it was stated ‘this track has not been reactivated’ despite an injury to Juan Bernat. 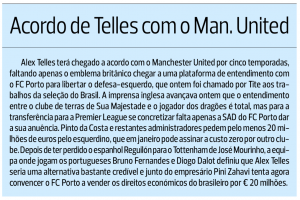 The French newspaper made clear things could change, yet also made a point of saying PSG are not currently looking to sign a left-back, giving Layvin Kurzawa the chance to stake his claim.

Saturday’s Portuguese newspapers were expected to bring some big news, but, frankly, there’s hardly anything. 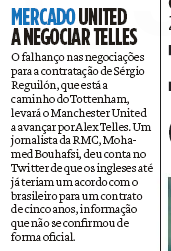 We’ll go through each one to make the situation clear.

A Bola have a small article with a headline saying ‘Telles agreement with Man United’, but it’s according to ‘the English press’, which we would assume is in-turn according to the French claims.

Their only piece of independent information is that the player and Zahavi are trying to convince Porto to sell him for €20m.

O Jogo have a tiny snippet on it, which, in full, says: ‘The failure in negotiations to sign Sergio Reguilon, who is on his way to Tottenham, will lead Manchester United to advance through Alex Telles. An RMC journalist, Mohamed Bouhafsi, said on Twitter that the British would already have an agreement with the Brazilian for a five-year contract, information that has not been officially confirmed.’

Record’s front page has a small bit saying ‘Man United grab Telles – Agreement for five years with the fullback’, yet their actual article, on page 38, makes clear that’s according to the French media.

They say Porto want €20-25m and point out Telles has an Italian passport so wouldn’t require a work permit. 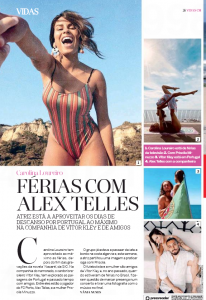 Over at Correio da Manhã, their Telles news is that he’s been holidaying around the Algarve on a yacht with his wife and Brazilian pop-star Vítor Kley.

In all honesty, the left-back being called up for Brazil’s latest national squad has been biggest news about him in Portugal over the past 24 hours.

That’s not to say they’re dismissing the idea of Telles to Manchester United, indeed it was the Portuguese press with the scoop of Zahavi working on it. But, there’s no claims of an imminent move, and a distinct lack of excitement about any potential progress on the deal.

Such a lack of buzz around the player is a little surprising, and suggests things aren’t as advanced as has been claimed. The Porto star represents the chance of a great signing at a reasonable price, and it goes without saying that Zahavi will be trying his best to explain that to clubs who could be interested.