Home Europe From Portugal: Update on Sporting’s chase for Marco Silva, there was a...
SHARE

Candidate for Sporting presidency Madeira Rodrigues has ruled out the possibility of having Marco Silva as the club manager so soon.

As Rodrigues works on his campaign, he’s been in talks to find investors and even managers who could replace Jorge Jesus at the end of the season.

The Portuguese press have recently mentioned Marco Silva as a possibility, especially because the presidential candidate recently travelled to England and watched Hull City playing against Manchester United. 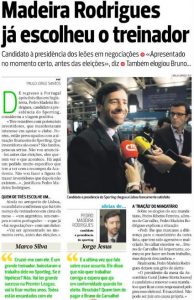 Speaking to the papers on Thursday, Rodrigues claimed that “an Argentine, a European and a Portuguese” are on his list. But when asked about Marco Silva, he said (via A Bola): “I met him. He’s a great manager, his work at Sporting was boycotted.

“If he’s a possibility? No. He’ll have great success in the Premier League, will stay there for many years. They’re delighted with him.”

Silva was the manager of Sporting during the 2014-15 season. He won a cup title back then, but due to the third place finish in the league table, he ended up being sacked by the club’s current president Bruno de Carvalho.

In charge of Hull City, Silva has three wins, one draw and three defeats so far.