Home Europe From Portugal: Tottenham have tried to send player to Benfica as part...
SHARE

Portuguese side Benfica announced last night the sale of Carlos Vinícius to Tottenham Hotspur on a one-year loan deal.

Spurs are spending €3m for the move, and will later have the option to make the transfer permanent by paying an amount of €42m.

All local newspapers bring a few more details on the transaction today, claiming that the striker has the green light to flight to London and have his medical on Friday.

What caught our attention is that newspapers A Bola and Record both add the same information, claiming that Tottenham tried to include Juan Foyth in the deal. 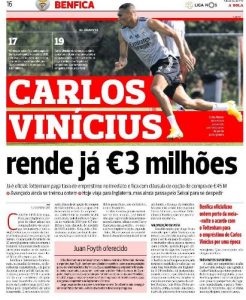 The Argentine defender was reportedly offered on a loan deal, but according to both newspapers, Benfica turned down the chance to sign him.

Manager Jorge Jesus is after a central defender, but he’s said to be more focused on getting the signing of Olympiacos’ Ruben Semedo, who’s also Portuguese. The Eagles have already signed two foreigners for their defence this summer, Jan Vertonghen and Nicolas Otamendi.

According to A Bola, Tottenham now continue to negotiate Foyth’s loan move to La Liga side Villarreal.