Reports from Italy have been claiming that the former Inter Milan boss has already landed in London and is now ready to take charge of the White Hart Lane side.

Now as we take a look at the European media, we recall that among the other names who’ve been linked to the Tottenham job in the past 24 hours, there was Sérgio Conceição.

It was the English press who picked the Porto manager as one of the options that Spurs had on the table, and now we get a reaction from the Portuguese media about that. 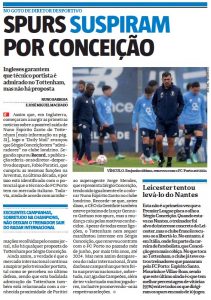 Newspaper Record features a story on the situation, and after covering the claims from England which said Conceição has ‘admirers’ at Tottenham, they say this was referring to Fabio Paratici.

With the official working at Juventus for a long time, it’s claimed he’d ‘identified with the potential’ that the Porto manager had in the Italian market. It’s also recalled that Paratici is close to Jorge Mendes, who represents Conceição, and already worked on Espírito Santo’s move to Spurs.

However, Record claims there hadn’t been any offer from Tottenham for Conceição. It’s said the London side didn’t even show their interest, and now given the recent news from Italy regarding their fast and strong pursuit for Conte, it seems the newspaper was right.