The issue between Sporting and Wolverhampton Wanderers for the transfer of Rui Patrício seems to be very close to being solved.

As reported by Correio da Manhã on Wednesday, the new Lions president Frederico Varandas is expected to be negotiating with the Premier League side soon.

Varandas has taken charge of Sporting in a moment when the club is in need of money, and the quickest way to raise a big amount is to negotiate the pending deals from the players who rescinded their contracts.

Correio da Manhã claims that the Lisbon side should now accept the €20m which is said to have been offered by Wolves when Rui Patrício signed for the club for free. 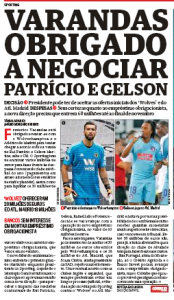 Wolves had always been offering close to that amount to avoid a legal dispute, but Sporting wanted more, demanding over €50m in a complaint they’ve sent to FIFA.

Besides Rui Patrício, Sporting are still looking to make some money with the transfers of Gelson Martins, Daniel Podence and Rafael Leão.

They all left the club in the summer after rescinding their contracts, and signed for new sides who didn’t spend a penny on the transfers.