For the first time in a while, the Portuguese press are linking Manchester United to Sporting midfielder Bruno Fernandes.

Newspaper Record comes up with a story today saying the Red Devils had a scout watch the player in the game against Porto last weekend.

According to the outlet, it was a member of Ole Gunnar Solskjaer’s staff who traveled and brought his report to the Norwegian boss after Sporting’s 2-1 loss to the Dragons.

Manchester United’s scouting mission is seen as a ‘revaluation’ of the Sporting star, as the summer love could be ‘rekindled’ due to the club’s need of a midfielder. 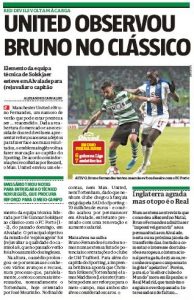 Regarding Fernandes’ price, the only thing Record says is that neither Manchester United or Tottenham Hotspur would match the €70m demanded by Sporting last summer.

The midfielder ended up signing a new contract with the club, but it doesn’t mean his price has gone up. The new deal was more about a well deserved pay raise.

Bruno Fernandes has 13 goals and 13 assists in 24 games for Sporting this season. The impressive stats aren’t something new for him, since he’s had 32 goals and 18 assists for the club last season.