A couple of weeks ago, the Portuguese media reported that Reading were insisting on the signing of Pedro Mendes from Sporting.

Following an effort back in January, the Royals were working on a deal so they could count on the striker for the 2020/21 season.

Then in the last week, it was even claimed that ‘everything indicated’ the player was moving to the Championship. Even though the name of the club was a ‘secret’, it led everyone to believe it could be Reading.

However, it now seems this all collapsed. Newspaper A Bola reports today that Mendes is actually moving to Spain, where he’ll join Almeria on a loan deal with an option to buy for €8m. 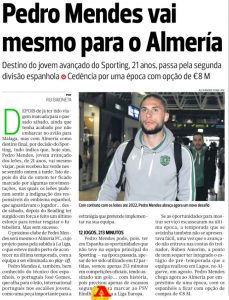 Reading even get a mention in their story. A Bola says the Championship side were going strong and even made a ‘last effort’ to sign the player, but ended up being unsuccessful.

There had been no details on how much the Royals were offering for the striker, although we can now take Almeria’s bid as an indication of what the English club wouldn’t put on the table.