Porto youngster Tomás Esteves is on his way to Reading, according to reports from the Portuguese media today.

Newspapers Record and O Jogo both agree that the player is signing for the Royals on a one-year deal, which will not include an option for a permanent move.

The outlets claim that there have been no offers to buy the player in this transfer window, and that’s why this ‘last minute deal’ ended up happening with Reading. Porto were expecting to make about €20m from him.

They believe that featuring in the Championship will ‘open doors’ for the player in English football, and that could result in a sale to the Premier League in the future. That’s why a buying option isn’t included. 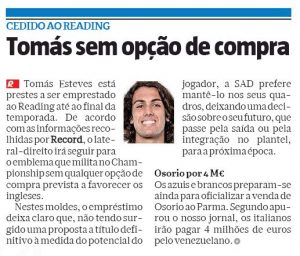 Tomás Esteves has only three appearances for Porto’s first team so far. He’s been called up for most of Portugal’s youth ranks, and that’s where he’s been drawing attention.

The 17-year-old has a contract with the Dragons until 2024, and is protected by a release clause of €40m.