Portuguese side Porto should have an important reinforcement for the Europa League clash against Steven Gerrard’s Rangers this week.

According to newspaper A Bola, the Dragons will likely have striker Moussa Marega back in the starting team against Rangers.

The 28-year-old was having fitness issues, and that’s why he didn’t even join the Mali squad during the last international break.

Also, when Porto got back in action for the League Cup this week, the player didn’t even make it to the team, missing their 5-0 win over Coimbrões. 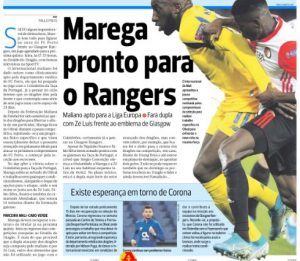 This is all part of a plan from the club to have Marega fit for a very important part of the season. And it all starts with the game against Rangers.

Marega has four goals and one assist for Porto this season, being the team’s second top scorer, just behind Zé Luís. It’s very likely that they will both start at Estádio do Dragão on Thursday, so Rangers better be aware of that.