Home Europe From Portugal: Player could be on his way to Everton, Benfica now...
SHARE

Good news for Everton today, as the word in Portugal is that Diego Laxalt is on his way to the Goodison Park.

Why in Portugal? Well, the local media had some interest in the player, as Benfica were said to be chasing him since the World Cup.

But now, newspaper Record reports that the Eagles didn’t make an official bid for the player, and he’s ‘close’ to a move to England.

The outlet claims that the deal between Everton and Genoa could be closed for between €10m and €15m, and they make it pretty clear that it’s their own information, not covering it from somewhere else. 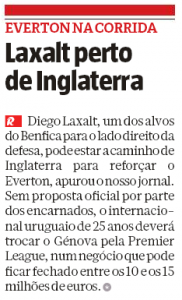 In the past few days, several reports from the Italian media have been linking Laxalt both to Everton and West Ham United.

The midfielder, who can also play as a left-back or a left winger, has had an impressive World Cup for Uruguay, receiving attention from several clubs.

Considering that he’s still 25 and Genoa paid €6m to take him from Inter, it would be an impressive move from Everton to get him for only €10m-€15m.