With the English media reporting West Brom’s wish to make Filip Krovinovic’s loan permanent, the Portuguese press has been having some interesting reactions to it.

Lask week, newspaper Record stated Benfica were evaluating the possibility of keeping the midfielder in their squad for the next season, stopping the Championship side from signing him.

Now it’s time for O Jogo to come up with a similar take. They first cover reports from England which say the Baggies are keen on paying €11m to keep the player.

Then they say Benfica’s board has been discussing the chances of holding Krovinovic at the club. However, the player ‘could offer some resistance’. 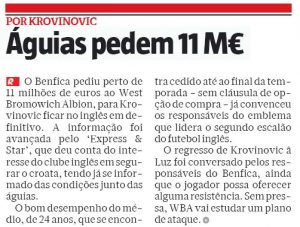 Krovinovic wasn’t being used much by Benfica at the time he left the club, getting only 12 appearances in the 2018/19 season.

The midfielder has already claimed he’s pretty happy at West Brom, currently with 34 appearances this season, so it would be no surprise to see him pushing for a permanent move to the Baggies.