The news comes at the end of a story about the many market moves which Porto have made during the transfer window. There’s no fanfare about Herrera to Watford, just a claim the Mexican has an offer.

Diário de Notícias doesn’t jump in headfirst, or give any further details about the transfer chase, they simply believe a move is possible because of the Watford approach.

It’s always worthy being skeptical about rumours between Portuguese and English clubs, because the Premier League is seen as a goldmine for all those who want to sell players. 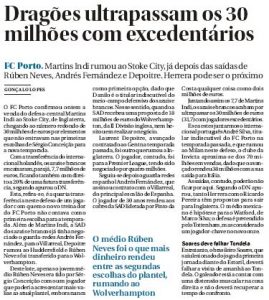 Last year, Hector Herrera was linked to several Premier League clubs, and despite reports of an agreement being close, a potential move to England never really got off the ground.

The Marco Silva link at Watford provides a further reason for rumour pushing, but it also gives the club some more insight into talents available in Portuguese football.