When checking the Portuguese media today, we expected to see several stories about Angel Gomes’ last day of contract at Manchester United.

Since his father used to play for Portugal’s youth ranks, and he’s also the cousin of former Red Devils winger Nani, the teenager always had some attention from the local press.

But there isn’t a lot to be read. The only newspaper who brings a story on Gomes today is Record, and they have very little to tell.

Besides taking claims from the English media to say the player has rejected all renewal offers from the Red Devils, all they managed to learn on their own is that money was never a problem. 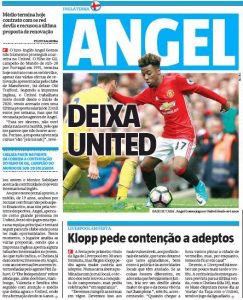 According to Record, Angel Gomes is leaving ‘not for the financial, but for the sports aspect’. He’s made only eight appearances for the club this season and should head to a side where he’ll get more chances.

That’s all we’ve seen today, as the player and his staff rarely leak things to the Portuguese press. Even the claims from last week saying Benfica were interested in him were brought from the English media.

Angel Gomes is still to make his name in his home country, and a few outlets still call him ‘Nani’s cousin’, as the Champions League winner managed to build a much more solid career at Manchester United.