Home Europe From Portugal : Nuno could be set for big job after Wolves...
SHARE

Nuno Espirito Santo said goodbye to Wolves at the weekend, in an emotional occasion for all involved.

The manager had taken Wolves to the Premier League and established them there, and now the club face a big task to replace him, with Bruno Lage currently thought to be the likeliest option.

Espirito Santo has been linked with a move to Tottenham for over a year, with it thought he could be the man to replace Mauricio Pochettino and then Jose Mourinho at Spurs. With Ryan Mason only appointed on an interim basis at Tottenham, the club need to find a successor, and one who will please want-away Spurs captain Harry Kane.

Should Tottenham be looking at the former Wolves man then they’re going to face competition, with Tuesday’s A Bola reporting a move to FC Porto could be on the cards.

Monday saw reports Sérgio Conceição, who had been linked with Wolves, will be leaving Porto to take up the Napoli job. A Bola say Espirito Santo is one of the men under consideration to replace him, along with Vítor Pereira and Leonardo Jardim. 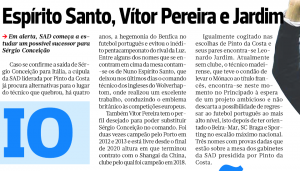 It would be a return for Espirito Santo, who managed Porto prior to his period with Wolves.

The manager is currently the favourite with bookmakers to take over at Tottenham.

From Spain: Liverpool star could have new transfer ‘option’ if he does well in CL final

From Spain: Liverpool star could have new transfer ‘option’ if he...