Newcastle United and Norwich City were among the clubs who paid a visit to Estádio do Dragão on Monday night.

Scouts from both English sides were present to watch Porto’s league game against Nacional, according to Portuguese newspaper O Jogo.

The outlet doesn’t seem to know who the emissaries had an eye on.

Although the Canaries don’t always have a scout in Portugal, Newcastle are frequently mentioned in these lists published by newspapers, especially at Porto matches, and should have a specific target at at the club.

Porto beat Nacional with a 3-1 scoreline, and keep themselves on top of the Portuguese League, six points clear from Braga, who are in second place. 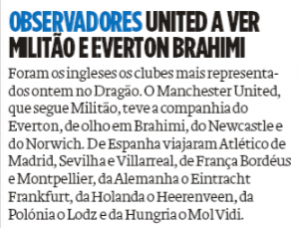 Midfielder Jesus Corona was picked by O Jogo as the man of the match for the many attacking plays he created. Maxi Pereira, Eder Militão, Yacine Brahimi, Hector Herrera and Tiquinho Soares were much praised as well.

For the away side, only midfielder Aleksandar Palocevic had a really good performance.

With Herrera and Brahimi having their contracts expire at the end of the season, they are definitely a duo to keep an eye on.