Firstly, TVI24 reported that the transfer was at risk after Manchester United had put in an offer way below what Sporting request, and with bonuses which weren’t deemed realistically achievable.

(You can read that here)

Then, Portuguese football legend Paulo Futre spoke on CMTV and said Bruno’s presence in Friday evening’s derby against Benfica was in doubt, with Manchester United pushing, and the possibility they could agree a deal before the match.

Futre said there were ‘very small details’ left to sort out, and he pulled Andreas Pereira back into the agenda.

(You can read that here)

CMTV is Correio da Manhã and, as we’ve said before, we’ve found them to be sensationalist previously.

Despite that, there’s more positivity this morning. A Bola say Bruno’s presence in the derby is at risk, with United ‘accelerating’ and wanting the transfer ‘closed’ before then.

Sporting, however, are fully convinced their captain will be playing the match. 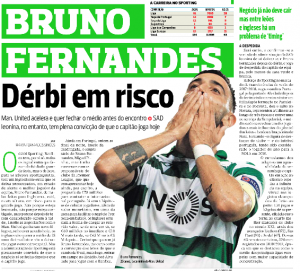 Miguel Pinho, Bruno’s agent and brother-in-law had talks with the English club who now want to present a €70m offer ‘in writing today’.

Record go with claims similar to the negative ones of Thursday evening (again, you can read that here), although they’re confident the deal will happen.

O Jogo say Manchester United representatives have been in Lisbon, and ‘talks continued into the night’, with Sporting still determined their captain plays tonight.

Just before they went to press, O Jogo’s understanding was that Sporting want €60m plus either €10m or €20m in bonuses, likely depending on the difficulty of reaching them.