Manchester City are preparing themselves to make an offer for the Benfica youngster João Félix, according to the Portuguese press today.

Correio da Manhã says the Premier League side have now decided to go for the 19-year-old after Txiki Begiristain’s visits to Estádio da Luz to watch the player.

Although Félix didn’t do very well in Benfica’s game against Dinamo Zagreb, Correio da Manhã says that Txiki Begiristain, who attended the match along with Jorge Mendes, didn’t become less interested in the starlet because of that.

The newspaper also claims that the price may be a problem, since Manchester City consider Benfica’s asking price of €120m to be too much. 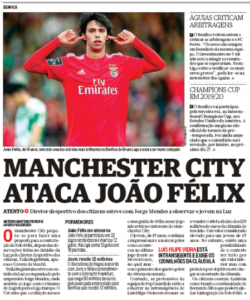 To get to a deal with Benfica, Pep Guardiola’s side could include several performance bonuses in the deal, making the amount eventually get to the €120m price.

It’s claimed that Manchester City also count on Bernardo Silva to be an advantage in the chase, since the former Benfica player could help Félix to adapt to the English club.