It’s quite rare for the Portuguese media to have exclusive stories on what’s going on with their players in the Premier League.

They claim the club are concerned regarding the midfielder’s ‘mental and physical wear’.

It’s said too much is going on around him, and that needs to be managed.

This is one of the reasons why Manchester United went after so many signings at the end of the transfer window, as new incomers such as Alex Telles and Edinson Cavani could take the weight off Bruno’s shoulders. 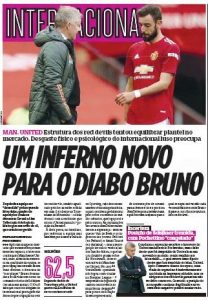 O Jogo also talks a little about the situation of Ole Gunnar Solskjaer. Following the rumours which link Maurício Pochettino to the club, it’s said Red Devils’ officials claim not to have made any kind of contact with the Argentine manager.