Portuguese newspaper A Bola has a new slant on Manchester United’s chase for Bruno Fernandes today.

In a single paragraph, they say that although it’s been claimed in England the club perhaps gave up on signing the midfielder, they’ve learned a different version of the story.

According to A Bola, Manchester United are first working to improve the defence, having their main target in Harry Maguire.

After signing a centre-back, then the Red Devils will buy two midfielders. The priority is Bruno Fernandes, who’s been an express desire of Ole Gunnar Solskjaer. 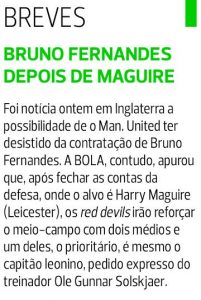 The Portuguese press has a lot of respect for the English media, and often cover reports from the UK. So A Bola are probably pretty sure of what they’re saying to be so direct against those claims.

Newspaper Correio da Manhã is another one with a story about Fernandes today. They say that Sporting president Frederico Varandas has spoken to the player during the preseason camp in Switzerland. The chat only lasted a few minutes, with the official making the situation clear to the player.

It’s been claimed that Sporting are still waiting for a bid of €70m, while the interested clubs, headed by Manchester United, haven’t offered over €55m. Fernandes is said to be calm, waiting for clubs to bid the amount demanded by the Lions.