Manchester United were reportedly one of the clubs who had scouts at the Portuguese Cup match between Vizela and Porto last night, according to local reports.

Newspaper Record is the one who reveals the list of emissaries, claiming the Red Devils were followed by the likes of Lille and Eintracht Frankfurt at the stands.

When reporting lists of scouts, Portuguese outlets don’t normally guess the player’s who’ve been watched. But this time, the story gives a good mention to Fabio Vieira.

Record writes that the clubs who sent emissaries ‘will have taken good notes’ from the midfielder, who was the man of the match. 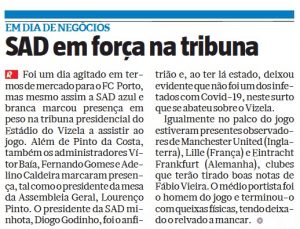 Vieira indeed changed the game when coming on at half-time, when the score was still 1-1.

He won and scored a penalty at the 65th minute and continued creating several plays for the 3-1 win.

This is the first time Manchester United are mentioned in the same story as Fabio Vieira, and it won’t be a surprise if a potential interest starts being reported now.

The midfielder had been linked to a Premier League move last summer, as Liverpool were said to be interested in him. At that time, with one year left in his contract, he could leave for the €30m release clause.

The 21-year-old, however, signed a new deal a couple of months ago, this time with a new clause which was not revealed by the Dragons.