Although José Gomes’ departure from Reading has widely been reported by the English media, most of the Portuguese press are still to know something about it.

Many outlets from the manager’s home country have just been taking what has been said in the UK, but there’s one of them claiming to know something today, which is O Jogo.

Their paper edition brings a story saying the manager’s exit was ‘decided and agreed’ last night. They say there’s been an agreement between the Royals and Gomes so he can leave the club.

O Jogo knows that the official announcement is still to be made by Reading, but are sure that this is being done very soon. 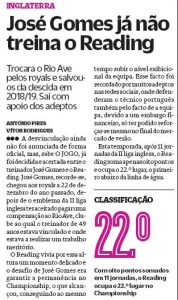 O Jogo highlights that Gomes is leaving the club ‘with support from the fans’, who have been thanking him on social media for avoiding Reading being relegated to League One last season.

José Gomes took charge of Reading close to Christmas last year. He has a record of 10 wins, 12 draws and 15 defeats at the club.