Even though Portuguese outlet Correio da Manhã isn’t purely a sports newspaper, they give football all the attention today when featuring José Mourinho on their front page.

With a headline saying ‘Dismissals total 90 million euros’, they mainly take claims from the English press which bring all the maths together about the manager’s departures from the clubs he’s worked at.

Their most interesting story is actually an exclusive piece, and that’s about agent Jorge Mendes being against José Mourinho’s decision to join Tottenham Hotspur in November 2019.

The newspaper says the representative had ‘opposed himself’ regarding the move, and the manager ‘decided by his head’ to take charge of the London side anyway. 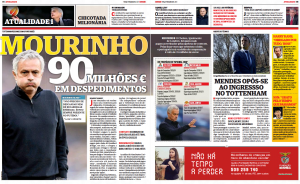 According to Correio da Manhã, Jorge Mendes claimed Tottenham ‘wouldn’t be the indicated destination’ for Mourinho, as ‘it’s a complicated club’. He didn’t follow the advice.