Home Premier League Arsenal From Portugal: A goal against Arsenal would be ‘historic’ for club, local...
SHARE

Vitória Guimarães are in a very delicate situation in Europa League. With no points after two fixtures, a win against Arsenal would be crucial for them to keep a chance of qualifying.

Now although the Portuguese press could perhaps be encouraging the club for such a feat, they are actually showing how unlikely it will be.

Newspaper O Jogo brings a story today saying big Portuguese clubs such as Porto, Sporting and Braga have all played at the Emirates Stadium before, but none of them have scored a single goal at the ground. 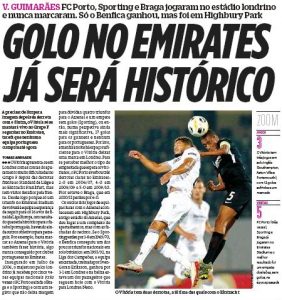 To make things worse, Arsenal have scored 17 goals in that period. The Gunners have beaten Porto 2-0, 4-0 and 5-0, and have also beaten Braga 6-0. The only Portuguese side who held them were Sporting, with a 0-0 draw.

That’s why, as said by O Jogo, a goal at the Emirates would be historical enough for Vitória Guimarães. That’s certainly not a great confidence boost or motivation for the Portuguese side.