Portuguese side Benfica are becoming interested in signing Teemu Pukki from Norwich City, according to reports from Lisbon this Thursday.

Newspaper A Bola says the Eagles have been internally evaluating the signing of the striker, and could soon make a move for him.

Benfica are looking for a new attacker this summer, since they should be selling João Félix and Jonas could retire.

That’s why they have €15m to spend on a player for the position, even though they think that may not be enough due to the great season Pukki has had for Norwich City.

The Eagles are said to have a lot of material on Pukki, and are aware of his qualities, knowing he has a ‘strong shot’ and a ‘very good air game’. 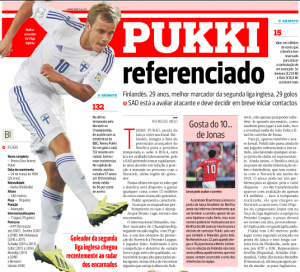 A Bola makes it clear that there’s nothing more than an interest so far, so Benfica are still to make an approach for the 29-year-old.

Signed from Brøndby on a free deal last summer, Pukki has scored 30 goals for the Canaries this season, being more than crucial for the club’s promotion to the Premier League.