But for that to happen, it seems both the Cottagers and the Hammers will need to raise their bids for the 22-year-old.

Newspaper A Bola writes today that both Sporting and the player are open to a transfer this summer, as long as there is a good offer on the table.

The outlet claims that the ‘concrete’ bids made by Fulham and West Ham were of just over €15m, but that won’t be enough to take the winger out of Lisbon. 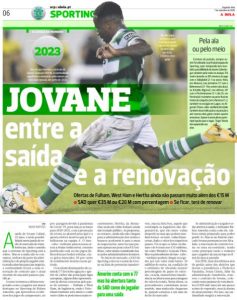 They then agreed to put the price down to €20m, as long as they get to keep a percentage of a future transfer.

Having already done that, they shouldn’t make any more discounts.

Besides the interest from Fulham and West Ham, A Bola says Jovane is also followed by Tottenham Hotspur and Hertha Berlin.