It’s Portuguese newspaper Record who brings some details on Tuesday regarding Fulham’s chase for the Sporting winger Jovane Cabral.

The outlet claims that the Craven Cottage side have put on the table an offer of a loan plus an option to buy the player for €10m.

The 21-year-old is said to be excited about the move, especially at the chance of getting more playing time than he’s currently been given at Sporting.

The Lions are also happy to negotiate a player who hasn’t been used much, and are only loaning him out in case Fulham accept to pay for his entire wages. 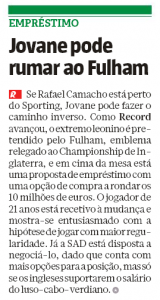 Record don’t say how much Jovane makes at Sporting, but English clubs can normally pay a lot more than Portuguese sides, so that shouldn’t be a problem.

Back on Monday, we covered reports from the local media saying Sporting would rather sell Jovane on a permanent deal, but it seems Fulham have been insisting on getting a loan first.

Jovane had four goals and eight assists in 21 appearances for Sporting last season. He’s a product of their academy, and is protected by a €60m release clause.