After working alongside Marco Silva for years, the coach has decided to leave his job as an assistant at Everton to finally take charge of a club.

And it turns out that the Portuguese press was quick naming a substitute for him. Newspaper Record brings a short story today saying the replacement could be former Arsenal player Luís Boa Morte.

They don’t bring many details on the move, only claiming that he ‘could’ be joining Marco Silva at the Toffees, and highlighting his experience in English football. 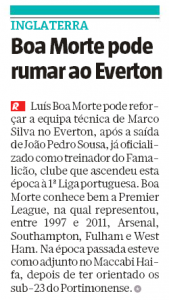 Between 1997 and 2011, Boa Morte played for Arsenal, Southampton, Fulham and West Ham, having spent most of his career in the Premier League.

He started his managing career at Sporting, where he was an assistant manager and also took charge of youth teams. He later had a short period as an Arsenal scout, then managed Sintrense’s first team and Portimonense’s U23. For the last season, he had been an assistant at Maccabi Haifa in Israel.