Home Europe From Portugal: ‘Everything indicates’ midfielder is moving to Wolves in €15m deal
SHARE

The rumours from the Portuguese press linking Wolverhampton Wanderers to Sporting midfielder João Palhinha are getting a lot bigger today.

Newspaper A Bola brings a piece saying the 24-year-old is on his way to England, as the Lions are about to receive a convincing offer for his transfer.

Palhinha is at the end of a two-year loan spell at Braga, and the outlet says he shouldn’t even return to Sporting at the end of the season.

The Lions would get a bid of €15m, and that’s exactly what’s considered enough to let him go, so there’s an ‘agreement in principle’ with an English club already. 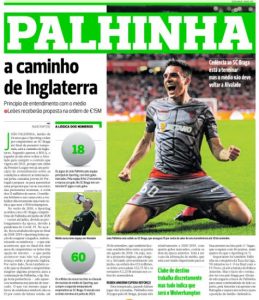 It’s said the club who are making the offer have been ‘working discreetly’, but ‘everything indicates’ it’s Wolves.

Last week, newspaper Correio da Manhã also reported the possibility of this deal. They claimed that Wolves had reached an ‘agreement in principle’ for the transfer, for the same €15m reported by A Bola.

So perhaps things are indeed on the move for Palhinha to go to Molineux.