Since Everton started being linked to Sporting midfielder Matheus Nunes, the Portuguese media have been full of positive and negative updates about this case.

It seems the signing was meant to be made for Nuno Espírito Santo, who didn’t take the Toffees job. Since then, the stories have brought different versions on whether Rafa Benitez would still like to make the signing or not.

This is the situation once again today, as Portuguese newspaper A Bola features a long article about the players who could leave Sporting this summer.

They recall that Everton were willing to spent between €18m and €20m on Nunes, but the attempt ‘did not advance when they ended up not signing’ Espírito Santo. 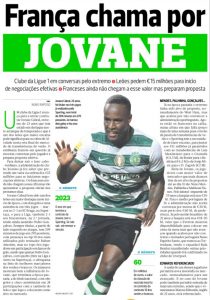 A Bola writes that Rafa Benitez has shown he has ‘other priorities’ when taking charge of the Toffees, and that’s why the club seem to be no longer in that race.

The Lions don’t seem to have another plan for Nunes, who’d represent a very welcome fee this summer. So that’d sound like a good opportunity for Everton to take him on a bargain deal, although it really sounds like they aren’t even interested any longer.