Home Europe Manchester United ‘playing with time’, trying to get fee down, could help...
SHARE

Although the Portuguese press expected a big auction for Bruno Fernandes, similar to João Félix, things actually seem to be moving pretty slowly for the Sporting star.

Newspaper A Bola brings a story today detailing the supposed fight between Tottenham Hotspur and Manchester United for the signing.

We normally call these disputes a ‘race’, but it doesn’t look like any of the clubs are working to get there first.

They start by saying that Spurs are back in for Bruno, having the player on top of their summer wish list once again, despite having cooled down their interest for a week.

The main issue is that they’re still depending on Christian Eriksen’s sale, meaning Tottenham have to wait for Real Madrid to move for the Dane before pursuing Fernandes for real. 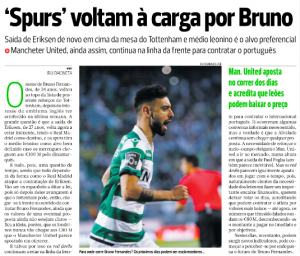 Although it’s still not known how much Tottenham will offer, A Bola claims it looks unlikely they’ll match the €80m Man United were thought to be willing to pay.

But will the Red Devils even go that high? Not now, it seems. And, to be clear, it hasn’t seemed like they’d pay a straight €80m at any point.

A Bola explain the Old Trafford side are ‘playing with time’, and waiting to see if they can get Fernandes for less.

According to the newspaper, the agents wanted to know how much the club really want for the sale. His price tag is said to be €70m, and the list of interested clubs includes Manchester United, Tottenham, Liverpool, Paris Saint Germain and Inter Milan.

Again, it’s worth noting this feels similar to the Giovani Lo Celso story, with claims in Spain Manchester United are prepared to pay €90m, which is hard to believe, whilst Tottenham have offered €40m.

A lot could depend on what happens with Paul Pogba and Christian Eriksen, and when.