It seems that things continue to move forward for Pedro Porro to complete his move to Sporting.

Portuguese newspaper Record brings one more story about the fullback today, this time claiming a deal between the Lions and Manchester City is ‘very advanced’ and ‘should be closed at any time’.

Porro, who’s spending the current season at Spanish side Real Valladolid, should join Sporting on another one-year loan spell.

Record once again highlights the fact that the partnership made between Manchester City and the Lions last year was crucial for the clubs to reach a deal for the Spaniard. 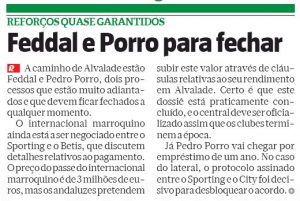 Manchester City signed Porro on a €12m from Girona in 2019, and immediately sent him to Real Valladolid, where he made 15 appearances this season so far.

Now it seems Pep Guardiola is still to be convinced that the 20-year-old deserves a place in the squad. Kyle Walker and João Cancelo continue to fight for a place on the right-back position, while Brazilian youngster Yan Couto is also joining the squad this summer.