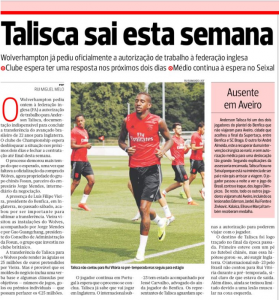 Here we are again, writing more words on Talisca, and it’s easy to say the Portuguese press are completely lost.

For a few weeks the local Portuguese papers have been saying that the move to Wolverhampton was totally agreed, pending just the work permit, which was being delayed by the Football Association.

But A Bola are now claiming that this request was made only on Monday, after the transfer between Benfica and Wolverhampton was completely sorted, as the Portuguese club’s president visited the English club during the weekend.

They say Wolves expect to seal the move in two days and finally put this saga to an end. The €25m fee should be divided between a payment up front and a few performance bonuses.

Talisca and his representatives would only be waiting to fly to England and finally sign the contract with Wolverhampton.

But Record has a completely different view on the story.

They say the work permit is very unlikely to be granted, and that’s why Talisca’s agent Jorge Mendes is already considering a move to a club outside the UK.

There would still be a chance of Wolverhampton buying the player for €25m and loaning him out to a club from abroad. They say Talisca already knows that.

This would be a usual disagreement between newspapers in normal conditions, but especially in this saga, it’s becoming hard to believe in any of them.

Someone is obviously briefing them wrongly, and with countless unfulfilled promises, they should start thinking twice before believing their sources.