Home Europe From Portugal: Conflicting claims on how much Man United are paying for...
SHARE

Most Portuguese newspapers today bring a story on Bruno Fernandes, and how Sporting just managed to make a few more million from him.

On Sunday, the midfielder made his 20th appearance for Manchester United, and helped the Red Devils to guarantee a place in the Champions League next season.

When announcing his €55m move back in January, Sporting stated that there was a further €25m availanble in bonuses, with €5m depending on his number of appearances and €5m on qualification for the European competition.

Newspapers such as A Bola and Correio da Manhã write today that the Lions made €10m yesterday. That’s €5m because of his 20th game and €5m for the the Champions League place. 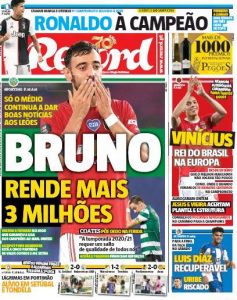 But newspaper Record, who have Bruno Fernandes on their front page, claims that things are not so easy, and Sporting actually made only €3m.

This amount was achieved due to the place in next season’s Champions League. Then Manchester United would have to pay €1m more if qualifying for the tournament in 2021, and the same in 2022.

Regarding the number of appearances, Record says the bonus would only be triggered once the player reaches 25 games.

They say that couldn’t be triggered this season even if Manchester United get to the Europa League final, since there would be four games left. But they’ve probably forgotten that the Red Devils still have a second leg to be played against LASK, meaning there would be five games in total.

To see which newspapers are right about these clauses, we’ll probably have to wait and see Sporting’s financial report.