Portuguese newspaper O Jogo has today a big story about Sporting’s plans to sign their old players back.

They say one signing they could’ve made in the last transfer window was the one of Marcos Rojo, who left Manchester United to join Estudiantes de La Plata on a loan deal.

It’s claimed that the Lions were keen on including Rojo in the transfer of Bruno Fernandes, who moved to Old Trafford on a €55m deal.

It looks like the problem was never with Manchester United, but that Sporting needed as much money as possible, as they’ve been struggling financially. So to include Rojo, they’d have to give up on part of the fee, which they didn’t. 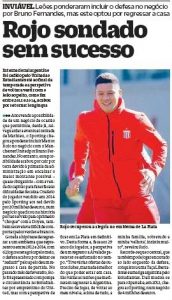 It’s also claimed that Marcos Rojo’s current wages at Manchester United wouldn’t be affordable for the Lisbon side.

O Jogo says that Rojo’s intention isn’t only to spend a loan spell at Estudiantes, but to stay there for good. His contract with Manchester United expires in 2021.