Home Europe From Portugal: Club depending on Man United money to be able to...
SHARE

There’s not a lot about Manchester United and Alex Telles coming from the Portuguese media today, but given how far this story got, we’ll take whatever small updates we can find.

The newspaper with the biggest article is Correio da Manhã. Their piece claims Porto will only be able to make signings after they sell the left-back.

The Dragons have been close on getting Toni Martinez from Famalicão and Pepê from Grêmio, but the outlet insists that these investments are only possible with Telles’ departure.

Regarding Manchester United’s efforts to sign the Brazilian, it seems things remain the same. 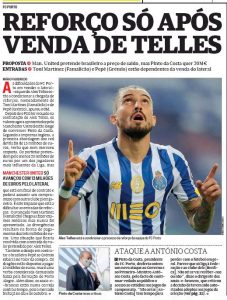 Correio da Manhã takes claims from England to say the Red Devils are only offering €13m, and say that Porto want €20m.

A Bola writes something similar, saying the negotiations reached an ‘impasse’, as Manchester United only offer €15m and Porto demand €20m.

They claim that the chances of Alex Telles staying at Porto for this season and leaving as a free agent next year are getting ‘stronger’.