Home Europe From Portugal: Club can’t do a lot to protect player from Manchester...
SHARE

Manchester United’s interest in Ruben Dias has suddenly become a hot subject in Portugal, with several newspapers dedicating a few pages to it today.

The reason for it were a few reports from the English media on Thursday. Now the outlets who cover Benfica are making it sound like an attempt from the Red Devils is imminent.

Newspaper Record has a big story about it, saying that even though Dias is protected by a €66m release clause, the price ‘does not scare’ the Old Trafford side, who spent more to take Harry Maguire from Leicester City last summer.

They also say Benfica’s intention is to hold the player ‘for many years’, with president Luis Felipe Vieira having scheduled a meeting with agent Jorge Mendes to offer a new contract. But that may not be enough to avoid Manchester United’s interest. 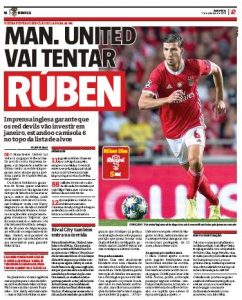 Newspaper A Bola is another one with a story about this chase today. They claim it’s no surprise Manchester United are one of the clubs being mentioned, since they are one of those who have a good relationship with Jorge Mendes.

They also claim that money should not be a problem for the Red Devils, and in case Dias decides he wants to move to the Premier League, there’s little Benfica can do about it.