Home Europe From Portugal: All of Braga’s squad concerns ahead of EL clash against...
SHARE

As Braga prepare for the Europa League clash against Rangers next Thursday, the Portuguese press comes up with the concerns from their side.

First thing is the players who are unavailable for the match. As reported by newspaper O Jogo, the Minhotos can’t count on Eduardo, Tormena and Bruno Wilson for the trip to Glasgow.

There has also been the weather issue, with outlet A Bola pointing out that Storm Dennis has left a ‘trail of destruction’ in the United Kingdom.

They claim the Ibrox Stadium has taken the storm really well, but still, Braga should ‘feel some of the effects’, since rainy and windy weather is expected for Thursday night. 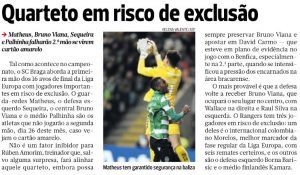 A Bola also highlights the fact that Braga are going to Ibrox with four players who are at risk of missing the second leg against Rangers due to suspension.

Matheus, Sequeira, Bruno Viana and Palhinha can’t get booked on Thursday, otherwise they won’t be able to play the decisive match in Braga.