Home Europe From Portugal: Benfica would listen to a huge Tottenham offer for Ruben...
SHARE

The Portuguese media reacts today to the news from the English press which says Tottenham Hotspur are interested in Benfica defender Ruben Dias.

Newspaper A Bola is the one who brings a story on the situation, and even though they don’t have a lot to say about José Mourinho’s efforts to sign the player, they bring interesting information from the Eagles’ point of view.

It’s claimed Benfica were expected to make big signings and build a strong team for manager Jorge Jesus this season. Things didn’t go as planned, since they were unexpectedly knocked out from the Champions League, and now might have to do the opposite.

The club are looking at players who could provide a big income, and Ruben Dias is naturally one of them. 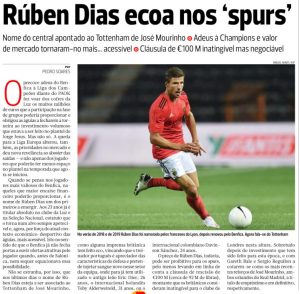 A Bola writes that Benfica ‘no longer close doors to listening to attractive offers for the player’, and that ‘makes him more accessible’.

Still, Ruben Dias continues to be an expensive target. He’s protected by a release clause of €100m, and that could be a problem for Tottenham.

The newspaper says this amount is ‘negotiable’, but it’s unlikely Spurs would go anywhere close to such a figure.