Home Premier League Arsenal From Portugal: Arsenal signing ‘on the table’ for next season – Following...
SHARE

The excitement from Arsenal fans regarding the potential signing of Sporting star Pedro Gonçalves is highlighted today in the Portuguese media.

Following a story from Eurosport which pointed out the 22-year-old was a target for the Gunners, many people on Twitter started showing support for his arrival at the Emirates Stadium.

That approval is featured in a story from newspaper A Bola, who has a couple of other things to add to it.

The outlet writes that Arsenal ‘continue to follow with enthusiasm’ the midfielder’s performances in Portugal, and have his potential signing ‘on the table’ for the next season. 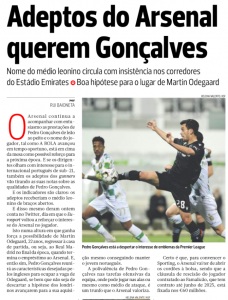 The newspaper also says that Gonçalves’ versatility is something the Gunners like, as he’d be a ‘good hypothesis for the place of Martin Odegaard’.

A Bola, however, also make it clear that it won’t be cheap to take the Sporting player out of Lisbon, as he’s currently protected with a release clause of €60m.

Since he has 15 goals and five assists this season, the Portuguese side won’t let him go for less than that, and even if they do, it won’t be by much.