With the international break coming to an end, Porto now start to know which of their players will be available for the Champions League clashes against Liverpool.

As newspaper O Jogo brings the news today, they say one of the Dragons’ key players is completely fit, while the other should miss both matches against the Reds.

The one who gets some big attention is Jesus Corona. The Mexican midfielder created some controversy in his home country after being left out of the international games due to an ankle injury.

Now, however, Corona is said to be ready to play again, and should be completely fit once the Liverpool game arrives on the 9th of April. 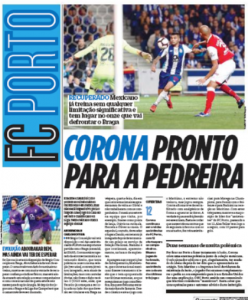 The bad news for Porto is about Vincent Aboubakar. The striker, who had a cruciate ligament rupture early this season, is even doing some work with the team, but is unlikely to return in the next couple of weeks.

O Jogo says he should only be back after the Champions League games, so there’s a player less for Liverpool to be worried about.

Aboubakar had scored 26 goals last season, but this will be a year to forget for him.